Gibson Couture Cleaners was founded in 1993 by the Gibson brothers, Mahlon Jr. and David. Influenced by their father, Mahlon “Gibby” Gibson, who was employed by North Chicago / Chicagoland Laundry and Cleaners for 30 years as a route driver, they began their journey. With the support of family, long time friends, and the encouragement of customers, David left his job of 13 years. As a route driver himself, David was introduced to many people in the Dry cleaning industry. Route service is where it began, and is now a passion for this company today. In 2002 the original production plant at 3432 N Southport in Chicago was relocated to a new state of the art facility now located at 3545 W Irving Park Road.

Mahlon has since retired from the business and the day-to-day operations are managed by David and his wife Laurie. Finding and retaining a quality staff has built a quality company. David and Laurie are proud of the their staff’s tenure. With 13 employees today, two have been with the company since 1993, and the rest collectively average 12 years of dedicated and loyal service to our company. Customer satisfaction and retention is equally important to this company and it shows. Providing a quality product with unparralled service, at a reasonable price is what separates us from all the others. 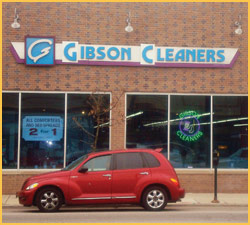